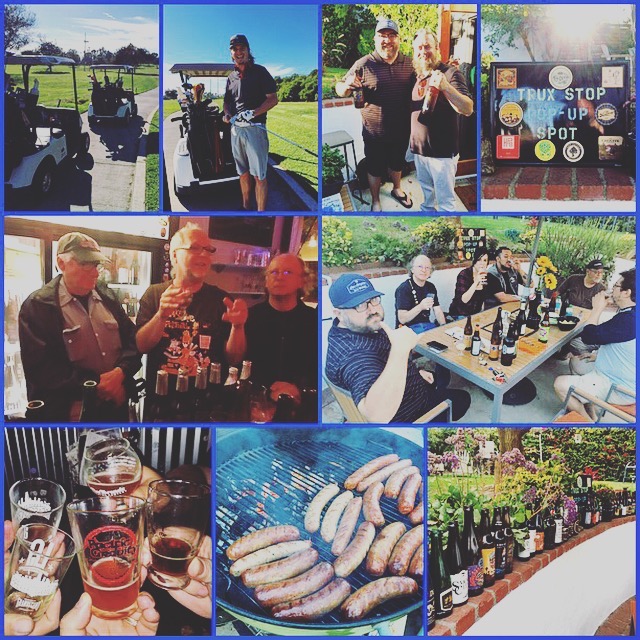 Well we had a lot of fun this last weekend. First off I would like to thank our new Activities Director, Brett Wilson for organizing and taking on the new roll this last few weeks! I and a bunch of other people can’t wait for the next event. Also a huge thank you to Tomm and Denise for hosting the After Party Bottle Share at their back yard bar called the Trux Stop. So many beers where enjoyed by all. Lastly I would like to thank Ian Fraser, our resident club Chef for cooking up some amazing grub as well. Mesquite charcoal cooked sausages and brats that then got a beer bath in secondary! Plus thank you to everyone that brought other amazing side dish foods and to everyone that brought all the beer to share!

A good bunch of us started off by meeting up in the mid morning around 10:15-10:30am at the Westchester golf course, to hit some balls and pay for our golf rounds. It was a busy day and the course was behind about 20-30 minutes tell we tee’d off. Brian Holter and two of his friends and other club member Bill was the first 4’some and then Brett Wilson, Michael Patterson, Ian Fraser, and I (Lloyd) was the second 4’some. The sun was out, but with a cool breeze as we all hacked away at the balls. No matter how bad we did we where having fun and we celebrated big on the good shots! We had a running  game between both 4’some of “closest to the Pin (flag)” on the par three holes, aka the ones we should hit it on the green in one shot. Good thing there where a lot of par threes! In the end one of Brian’s friend killed us on getting it closer, she took home the Beer Prize! Then we all finally made it to the 18th hole and finished off strong. There where a few craft beers enjoyed on the course, Brian was trading with everyone. We lost a couple balls in the water and over the fence, but we could of not had a better day out on the course!

Then we all headed to the Trux Stop, a bit late due to the late start on the course and a bit of waiting at the holes. Ian got right away to prepping the Charcoal Grills, Brian got to Popping Bottles,  Tomm showed the first timers around the bar and walk-in, and we all got to drinking some rare beers! A bunch of PG members where already there when us Golfers showed up, but then a lot more came as the night fell. Brett awarded Brian and I (Lloyd) with best and worst scores, I got worst with a 102 vs Brians 82 for 18 holes! As a lot of beer talking and passing around bottles continued, soon came time for food. We where all ready and I loaded a few plates that night. The beer bathed sausages where amazing and we can always count on Ian’s great food ideas. Plus we had all the toppings, some awesome salads, Mac & Cheese and also Spiced beans from Scott, 2) potato dishes, and tons of chips. Some time later Denise brought out a cake with all the club member’s October Birthdays on it and we all got a huge slices and ice-cream on the side after singing the B-Day song to the members that where present. Although after all the beer, food, and cake, the best part of the night was about to come. Tom and Tomm combined forces and brought out a beer vertical of “Samichlans Bier” aka the Santa Clause Beer, an imported Swiss winter warmer I believe. The oldest bottle spanning back 26 year!!! Bottle order: 1990, 1996, 2001, 2004, 2005, 2010. It was quite a treat, granted the first two tasted like soy sauce, but still awesome to try something 26 and 20 years old. The early 2000’s where more oxidized tasting, and then the 2010 was probably the best tasting. Where you could still pick out the original qualities, but with 6 years of age. An inspiring vertical tasting for sure, thank you Tom and Tomm!

Finally the night wound down, but a ton more great bottles where opened. Rives showed up later with some beer from going to the grand opening of Ventura Coast Brewing, where Dan White is now Head Brewer. Tomm held down the Trux Stop bar like a captain at his ship, as I asked hit what was next form the fridge behind him. One by one people drop off and had to go and so did I. Only to come back the next day to pick up some stuff and find the lines of dead soldier bottles following around the patio, great times!

Chris Remensperger from Strand Brewers Invites us on his AHA Rally Bus to S...
X
Scroll to top