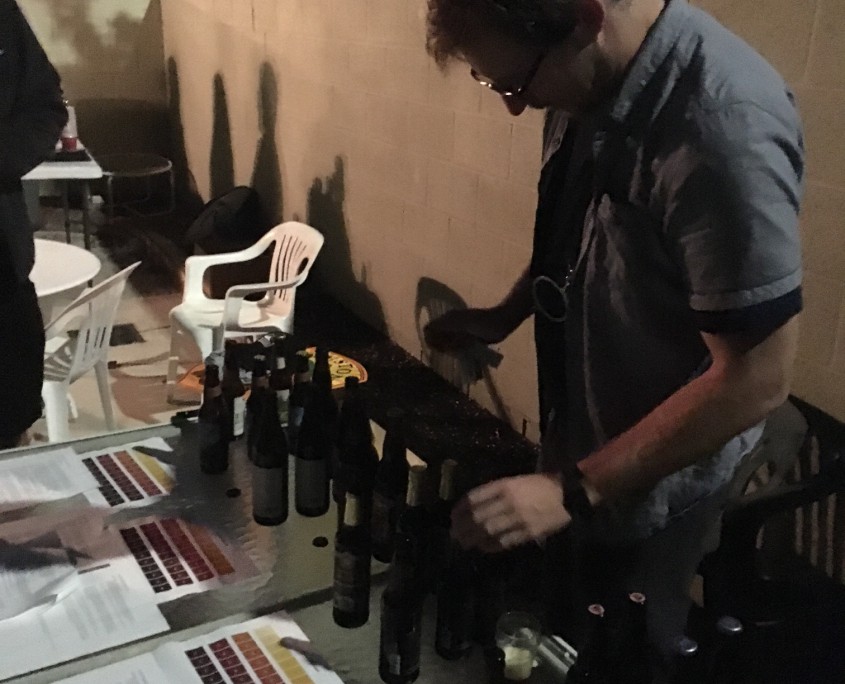 Couldn’t make the meeting last night? Here’s what you missed!

Michael Patterson and Greg Foster were at it again on the educational side of things at the start of the meet. Michael brought with him some great [sic] sun-soaked beer to give us a solid example of skunked, a definite off-flavor unless you work at Heineken. Greg held another of his Brülosophy exBEERiments, this time having to do with the effects of dry hopping.

A lot of the usual suspects were present there at Neil’s place and quite a few members brought out their home brews. Pizza was absolutely upstaged by a shrimp, rice and stir fry dish whipped up expertly by Neil’s girlfriend. I had two bowls so… My apologies if you didn’t get to try some.

Tim Jones wowed us with the selection of beers he broke out to host the commercial tasting with. Off the top of my head (Tim pardon my short memory) there was a bottle of Anderson Valley Amber, Alesmith’s Evil Red, Sam Smith’s Brown, Port Brewing’s Brown, Smog City’s Sabre-toothed Squirrel, an Imp. Red from Lagunitas. I’m sure I missed a few but between the choices and the BJCP printouts Tim hosted like a boss!  Thanks Tim!

Parker entered his Cinnamon Porter, Tad & Ramesh their Pumpkin Porter, and Tim his Simi-Mild but in the end Scott Stout took home the win for the Best Beer of The Night competition with his Caribou Slobber clone. Congrats Scott, enjoy using that $25 CCHBS gift certificate to make more great beer.

Of course, being the 21st anniversary club meeting, we had a little something special on tap. Thanks to Terry and his rockin jockey box we had our Firestone Walker collaboration Weizenbock and the three Chili Cookoff Weizenbock’s that Carl Townsend and Dan White brewed.  All four beers were great, I hovered around that area for basically my entire night.

I missed it, but I’m told the raffle was a riot ending with Barry and Neil both owning tickets that matched the last three numbers Terry called out. You see, somehow we sold tickets from two different rolls and… Yeah, that happened. What are the odds??  😀    Anyway, it came down to who’s ticket matched the last FOUR numbers instead and Barry won. A true gentlemen, he gave Neil half the prize: a nice Firestone Walker tin sign and then took home the other half, a growler full of our FW collaboration ale.

A few things to keep in mind…

We’ve been invited by Martin and Simon from Phantom Carriage to make and serve soda at a booth during their one year anniversary party on March 12th. Laws restrict us from bringing homebrew, as much as everyone would like to but it will be a good experience nonetheless and an excellent way to show what we’re made of. If you’re interested in providing a keg of soda and/or serving, drop me an email as soon as possible.

First Friday in March is our St. Patrick’s day celebration and it’ll be held, as always, at Irish Times. I’m told they’re putting on some great beers for the event and I hope to see you there.

That same weekend we’re brewing up a monster with Smog City!  If you’re interested and haven’t signed up yet, email Lloyd right now to get on the list.

So thank you to our educators, beer bringers, our host Neil and everyone who attended. See you next time.

How Do I Modify My Monster Brew?
X
Scroll to top