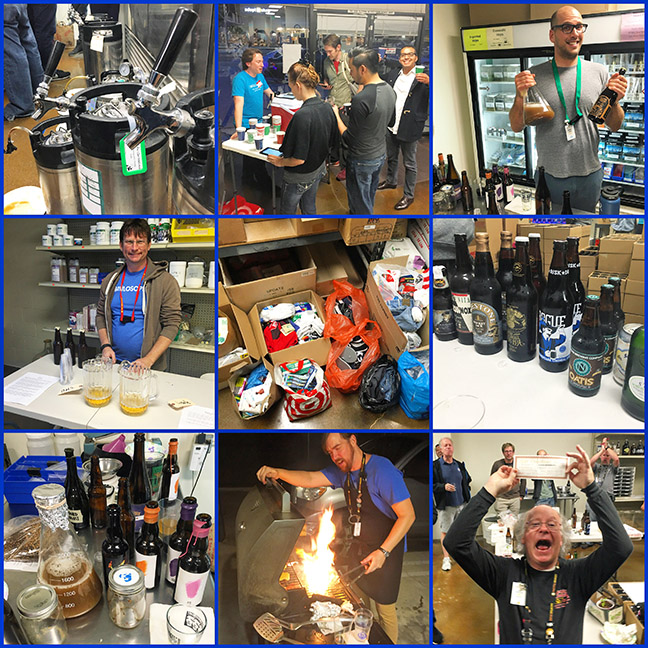 First off I wanted to Thank everyone again who brought their generous donations for our May club meeting charity drive. We collected a ton of stuff for our friends at OPCC.org and it showed with all the extra pink tickets people where given for the raffle because they donated. Which made the raffle more fun because people where yelling out pink or blue at every prize, wishing for there color to come up. We gave away a lot of great stuff that night too during the raffle because of it: hops and brew in a bag- bag, hop rhizome clipping and even a whole cap, shirts, beers, glasses, Firestone Walker glasses wear, and a few bundle pack of Wyeast and Firestone Walker swag, and a lot more.

Thank you to Michael Musgrave for stepping in and manning the grill he and Terry brought, cooking us a bunch of tasty burgers and large dogs with all the fixings chopped up by Dean and Terry. Ian I hope your recovering nicely!? Michael M. also bought our alternative fermentable commercial beers and Terry helped serve and present them.

We had Simon in from Phantom Carriage Brewery, doing the Barrel Project sours. Where a few of the PG homebrewers brought in sour beers and dregs to be added to wort Simon brought and will soon be added to a PG/PH barrel project soon!

We had some great educational stuff going on as well. Michael Patterson brought us two more off flavors to try: D.M.S. and Indole “BarnYard”. I personally finally had one I could not stomach with the indole off flavor, not the nice Brett barnyard flavors you would think. Michael P. also brought his own test of different added levels of grapefruit flavoring to beers, from low to high. Then, Greg Foster brought us another mind blowing triple triangle Brulosophy.com test to test on us! This time he did a 5 day traditional dry hop in wort vs. a long term hop in cold kegs of carbonated beer. The cold hop was surprisingly more aromatic.

We had more Homebrew then we could drink too! A bunch of kegs and some great examples of Alternative Fermentable Beers on hand. The Best Beer of the Night winner for the style of the month was our resident master brewer Carl and his Belgian Blond!!

Also a big thank you to Culver City Homebrew Supply for hosting the meeting at their shop, it looked like a bunch of club members where taking advantage of their extra club meeting member discount we implemented for this year. 10% off your purchase at the shop on club meeting nights hosted at the shop, instead of the usual 5% off.

May was one of those special club meeting months, and everyone had such a great time. Photos are on Facebook below, if you’re not seeing the gallery in email, click here. Thank you all for coming and see you all soon!