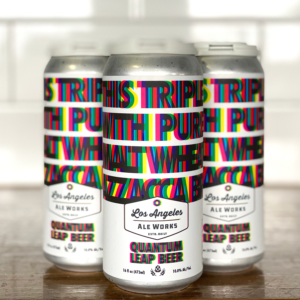 I hope this message finds you safe and healthy as we continue to shelter in place.

We had such a good time at our Virtual May Club meeting at Tortugo Brewing and sampling Joe’s beers that we have decided to repeat the game plan and go virtual to LOS ANGELES ALE WORKS for our June 18, 2020 club meeting!  Thanks Joe for making a great meeting happen!

Kip and LAAW has put together a knock-out line up of beers in the form of a four pack for club members to purchase.  They are:

Starting today you can swing by the brewery and tell them you are here for the “Pacific Gravity 4 pack” and set them aside until Thursday when Kip and Brian will tell us the stories behind the beers, give us updates on how the brewery is operating under current conditions and what beers they have planned for summer!

Kip also strongly recommends folks pick up a can of ‘DigiMax’ while they are there…it is not part of the 4 pack but it is beer that Kip like talking about!  So pick one up while you can!

Then on Thursday, June 18, 2020 at 7:30 PM tune into the virtual Zoom club meeting at LA ALE WORKS, sip some LAAW beers, and talk to the brewers and here the plans the club has for then next couple of months!

We are not posting the Zoom link publicly but all members should have received an email invitation with all the details.  If you did not get the email but want to join the meeting send me an email at [email protected] and I will forward it to you.