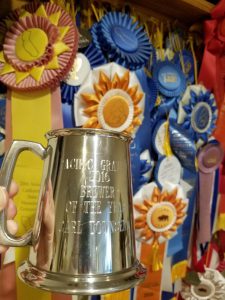 Well, a new year is upon us as well as a fresh brewing competition season.  I hope you took advantage of the cool weather over the holiday season to get some batches fermenting.  I did!   We have a couple of competitions coming up right away, but you still have plenty of cool weather to brew for some of the later upcoming competitions.  Each year, Pacific Gravity honors the brewer (or team) with the most homebrew competition wins from the list shown below.

Coming up quickly are the America’s Finest City (AFC) Homebrew Competition, hosted by QUAFF, and the AHA Nationals Competition.  Registration for AFC is already open at https://quaff.org/AFC-2017/ .  Entries are due at Alesmith Brewery by Wednesday, January 25th.  Like last year, we will be asking for a volunteer to drive them down to San Diego.  Drop me a line at Competitions AT PacificGravity.com if you can make the trip.  We’ll reimburse you gas money. For AHA, you must be an AHA member and need to sign up for your entry slots, between the dates of January 30 – February 5, 2017.  Your entry authorization and payment must be done by February 15th.  Physical entries will need to be shipped off by the last week of February.  Again, we’ll need a driver.

Next up on the radar is the 3rd annual Los Angeles Belgian Brew Challenge.  Entries will be due in Mid-March, with judging on March 25th.   Look for more details from Brian on this competition for volunteering, stewarding and judging opportunities  at http://belgianbrewchallenge.com/.   Best of show this year will be brewed at Los Angeles Ale Works.   Speaking of volunteering, we will be running Pacific Brewers Cup this September and will need everyone’s support.  The balance of the official list of competitions for accumulating Brewer of the Year is listed below.  Check back frequently as exact dues dates become known.

For those of you who are hard-core about entering competitions, here are some more local events, though they are not not part of the competition points list:

Still not enough competitions?  There are a bazillion other contests to enter.  The AHA has their master list at http://www.homebrewersassociation.org/competitions/aha-bjcp-sanctioned-competition/.