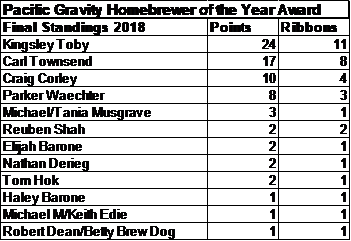 With a new year upon us, I hope you are taking advantage of the cool winter weather to get some fresh batches of beer going.  I’m currently working on a “garage lager”.  At some point, it will need to go into the beer fridge, but in the meantime, the garage is holding it at a steady 54 degrees.  Also in the works is an “aquarium heater ale”, kept at a comfy 72 degrees, despite a rather chilly house temperature.

Last year, Kingsley Toby had a bang-up year and walked away with the coveted Pacific Gravity Homebrewer of the Year award. Who will win this year?   Here is a rundown of the competitions eligible for point awards in 2019:

First up is America’s Finest City, run by QUAFF in San Diego.   Registration is now open at https://quaff.org/AFC-2019/   Beers need to be dropped-off any time up through January 31, 9:00 PM at AleSmith Brewing Company, 9990 AleSmith Ct, San Diego, CA 92126.  If anyone is interested in making the trip to drop off entries, please let me know and the club can reimburse you with gas money.

Next up is first round of the AHA Nationals.   You must be an AHA member to enter by January 21.  Then, the AHA will send you instructions on how to apply for entries the week of January 22 (10 a.m MST) to January 29.  Placement announcements are made on January 30 to January 31.  On-line registration then runs from February 1 to February 14.  Entry drop-off then runs from March 1 to March 14.  Depending on where you register, you will ned to ship your beer.  If we are lucky, we will have another volunteer to take beers to San Diego.

The third competition is the California State Fair.  This one has been moving earlier in the season each of the last several years.  Registration is already open at http://home.castatefair.beer/.  You can drop off entries at South Bay or Eagle Rock shops, but they must be packed for shipping.  Local drop-off is February 11 – February 15, 2019.

Los Angeles Belgian Brew Challenge comes up next.  As in past years, this is a competition limited to Belgian styles and will be held at Los Angeles Ale Works.  Entries will be due on March 8th, with judging on Sunday March 24.  Since this is one of our own competitions, we will need help in planning, bottle organizing and judging.

April will include the Jeff Sanders Memorial Competition, run by Strand Brewers club.  This is another limited-style competition focusing on the styles Jeff liked most.
Also in April will be the Maltose Falcons Mayfaire Competition

Although not part of the Pacific Gravity Homebrewer of the year cycle, here are a couple of additional competitions you might want to enter:

If you are hard-core competition junkie, there are a bazillion other contests to enter.  The AHA has their master list at http://www.homebrewersassociation.org/competitions/aha-bjcp-sanctioned-competition/.