For those of you who have been allocated entry slots for the American Homebrewers Association National Homebrew Competition in the San Diego region, I have successfully negotiated beer transportation to Alesmith Brewery.  You can drop off your entries at the Culver City shop by close of business Tuesday, February 28th.   You can think of this as giving up beer for Lent!

For all other locations, you are on your own to ship entries to the respective sites.  If you miss this deadline, you will need to ship your entries for arrival no later than March 8th.

Also now hitting the radar is the 2nd annual Jeff Sanders Memorial homebrew competition, hosted by Strand Brewers. This small competition celebrates the beers that Jeff loved. Registration and complete details are now available at http://www.jeffsandersmemorial.com/ . This is a limited styles competition, so check the rules carefully. Entries are due by April 1st, and can be left at the Culver City or Southbay brew shops. 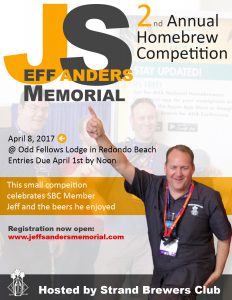